Tears from the Sea
The Pictures that Inspired 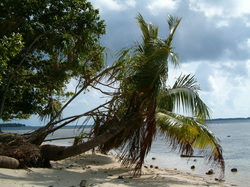 Tears from the Sea commences in the Mergui Archipelago—a series of 800 islands that stretch along 400 kilometres of the Andaman Sea, off the coast of Myanmar (formerly Burma). 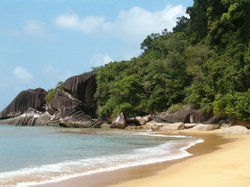 These pictures were taken on Tioman Island, in Malaysia. I went to an isolated section called Nipah and was amazed by the raw beauty of the landscape. The dense jungle stops abruptly at the beach and as I walked, pristine sand under foot, curious monkeys swung vine to vine in pursuit and the buzz of cicadas leapt out to meet me.

When writing about Kawi's stay on the deserted island, I likened the isolation to my experience in this underdeveloped paradise. 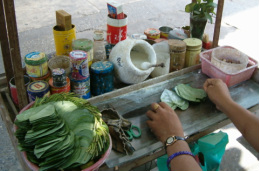 This is a portable betel street stall located in Yangon, Myanmar.

Betel is a mild stimulant. A betel nut is wrapped in betel leaves and chewed. For added flavour lime, clove or cardamom may be added.

Regular chewing stains the lips and tongue a deep orange.

I didn't like the taste! But I was more afraid of how my parents would respond...after all those trips to the dentist...if I returned to Canada with a bright orange mouth. 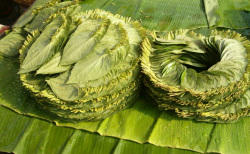 When I was in Mandalay, Myanmar I had a cyclone driver, whom I adored—I'm kicking myself for not taking a picture of him—and he shared  the story of when he was a teenager his father told him he could only have one vice. He had to choose between smoking or chewing betel.

He told the story with eyes shining and an endearing bright orange grin. 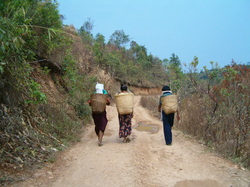 While trekking in Kalaw, Myanmar we saw women on their way home from the market and were amazed by how easily they walk these winding roads with large woven baskets resting against their backs.

Kawi's friend Akha tells her about a woman from her village who uses one of these baskets to forage in the jungle.

One of my favourite countries... 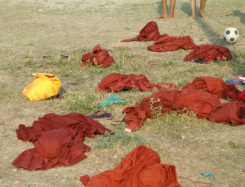 I was captivated by Myanmar; my love and enthusiasm or this fascinating country and its people is revealed through Dr. Howard.

Whether it be a field of soccer playing monks whose shed robes and flip-flops rest on the sidelines.... 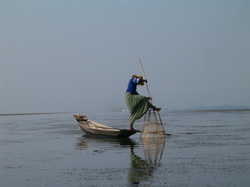 Watching the fishermen at Inle Lake... 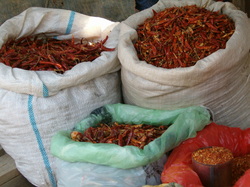 Admiring the chilies in the markets... 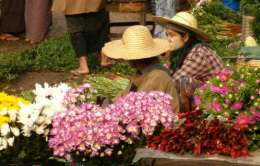 Women working in the market; their cheeks are smeared in yellow cream. It blocks the sun, smells nice and is good for the skin... 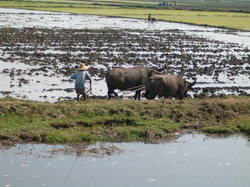 Farmers working in their fields... 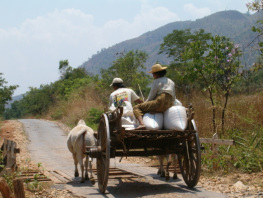 Or on their way to market... 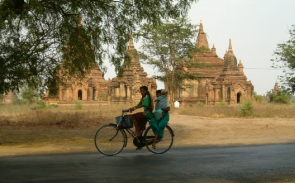 And a little more inspiration...

The Sea Gypsies of Myanmar

As one of many foreigners present in South East Asia during the December 26, 2004 tsunami, I was inspired to write about the plight of its victims—not from a tourist’s perspective, but a story about a local survivor and how the catastrophe altered a once idyllic life.

Initially I was not sure where to begin, but while trying to uncover everything I could about the devastating wrath of the tsunami, I stumbled upon a culture whose knowledge of the sea spared them from the world’s most horrific natural disaster. These people, the Moken, or as they are more commonly referred to as 'Sea Gypsies', captivated my imagination. And, thus began my fascination with one of the last true nomadic sea cultures.

I am indebted to the late Nicolas Reynard and Jacques Ivanoff whose photography and words were instrumental in guiding me. Reynard’s stunning images in National Geographic encapsulated the Moken in the exotic candor of their surroundings, which in turn infused my mind with the essence of their existence.

My greatest aspiration is that Kawi’s voice provides the reader with a glimpse into a culture on the verge of extinction and draws attention human trafficking, the slave trade of the 21st century.

What is human trafficking?

Human trafficking is modern-day slavery, involving the sexual exploitation and forced labour of vulnerable people by criminals around the world.
Did you know that...
-   After drugs and weapons, human beings are the most trafficked commodity in the world
-  According to the U.N., it is estimated that the market value of illicit human trafficking
exceeds $32 billion (US)
-   It is estimates that there are at least 27 million slaves in the world today—61 countries
are reported to be affected by human trafficking by being a source, transit or destination
-  People are reported to be trafficked from 127 countries to be exploited in 137 countries,
count (U.N.) affecting every continent and every type of economy (U.N.)


Did you know that in Canada...

-   Human trafficking is happening across Canada and its victims include men, women and
children who are Canadians and newcomers alike
-   Not just a big city problem; it also happens in rural communities
-   Some victims are still living at home with their parents but under the control of a trafficker
-   Traffickers have “playbooks” to teach each other tactics to exploit victims
-   Traffickers in Canada make almost $280,000 per victim each year
-   Cost of purchasing a woman in the flesh market up to $25,000
-   One woman can be bought on the streets of Montreal for $2,000
-   Thousands of Canadian men have paid for sex with trafficking victims

-   Human trafficking only became a criminal code offence in 2005
-   Canada has no national action plan to combat human trafficking
-   Most provinces, notably Ontario, have no system in place to help victims

What are the warning signs? Someone who is...
-   Not regularly attending school or going to work
-   Suddenly a new boyfriend appears on the scene who lavishes individual with gifts
-   In possession of a hotel room key
-   In possession of large amounts of cash (which will later be handed over to trafficker)

What can I do?

Write your local member of parliament to see what is being done to resolve this issue.